Star Wars: May the Force of 3D Character Design Be With You [Case Study]

A long time ago in a galaxy far, far away, with the light hand of George Lucas, a media franchise was born that was destined to turn the previously boring genre of space fiction upside down and be firmly imprinted in the memory of many generations.

It’s about Star Wars – not just a space opera, but a whole universe that has absorbed millions of enthusiastic viewers and players and is constantly serving as a source of incredible inspiration.

About Star Wars – not just a fantasy saga, but a cultural phenomenon that can reach any audience with the relative simplicity of the story itself.

About Star Wars – not just a collection of films and games, but the most powerful cult work that sets the bar for all the fantastic stories in the world.

Not to mention the number of games for PC, consoles, and mobile devices based on the universe, the number of which has long exceeded one hundred. One of which we were lucky enough to touch from the inside.

And before we completely turn our storytelling into an ode to the franchise, it’s time to make a statement – Kevuru’s 3D team was honored to work on three characters for the new immersive VR-based game Star Wars: Tales from the Galaxy’s Edge.

And we really want to talk about it.

The game is made in the genre of action-adventure in virtual reality, in which the player has to go into the wilds of the planet Batuu and plunge into a semi-open world with the main plot, side activities, resource gathering, and impressive shooting mechanics. The player takes on the role of a droid mechanic who finds himself at the wrong time and in the wrong place and incites the wrath of the local Guavian Death Gang. Pursued by a group of mercenaries, the hero is forced to find a way to fight back the army of pirates, along the way helping iconic characters of the Star Wars universe in the fight against the resurgent Empire. The game is currently exclusive to the Oculus Quest handheld helmets. 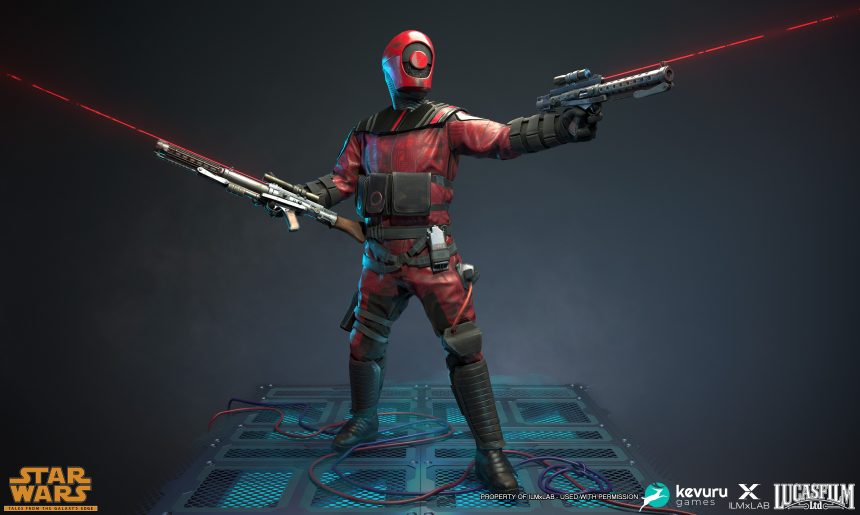 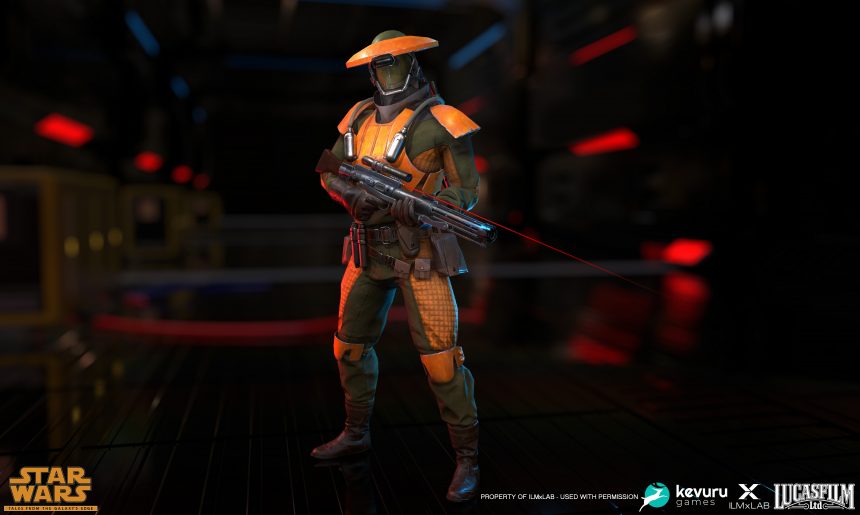 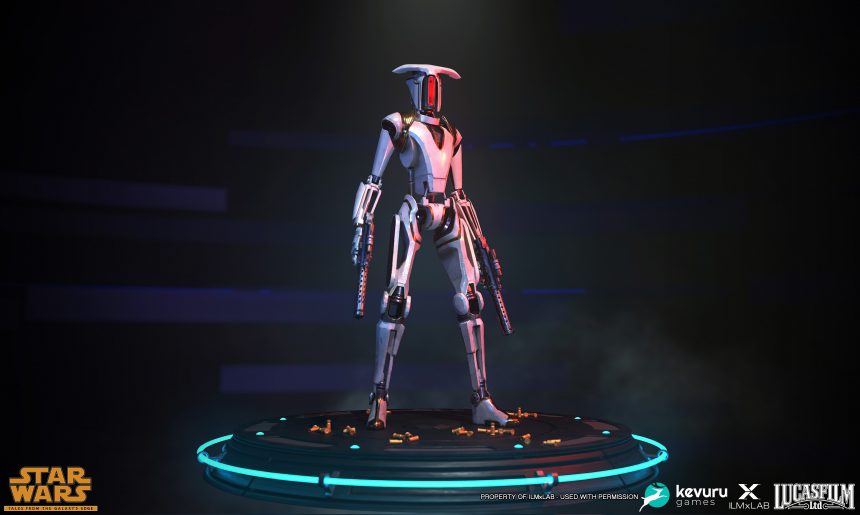 In addition to the Guavian security soldier, which was created as part of the test task, we needed to model two characters: the human Boggs Henchman and the Attsmun Industries Droid. Working on a human meant modeling organic textures, while a robot was a hard surface object with metal and mechanical parts.

At the beginning of the work, the pipeline was approved, in accordance with which a specific task was coordinated at each stage. At the first stages of blocking and high poly, calls with the client took place every day: we made daily delivery of the results of our work and immediately implemented the necessary edits and updates. Working in this format, we could instantly understand what the client wanted from us and quickly implement the necessary corrections without wasting time on interpretations that did not coincide with the client’s vision. Later, when the process was completely stabilized, we called up once a week. The daily progress check remained unchanged so that the client could see what we were doing during the working day.

The results were delivered through Lucasfilm’s dedicated internal system. It provided complete security and control over the storage of information. The feedback process was built in the format of edits on top: we shared our assets as screenshots, and the client displayed the necessary edits right on top of these screenshots, like on a whiteboard. Thus, we could easily see where where we went wrong with element spacing or placement and quickly correct the model.

The stages of creating the models were standard: we evaluated the work, agreed on the estimate, approved the team, assigned tasks, and started working. The production consisted of 6 phases:

After the end of the work, the client suggested adding us to the credits as a production team. It was not just a pleasant gesture for us, but a recognition of equal partnership. And it was logical, given that throughout the project we worked in the most polite and respectful atmosphere, where each artist was considered and appreciated as a master of his craft. 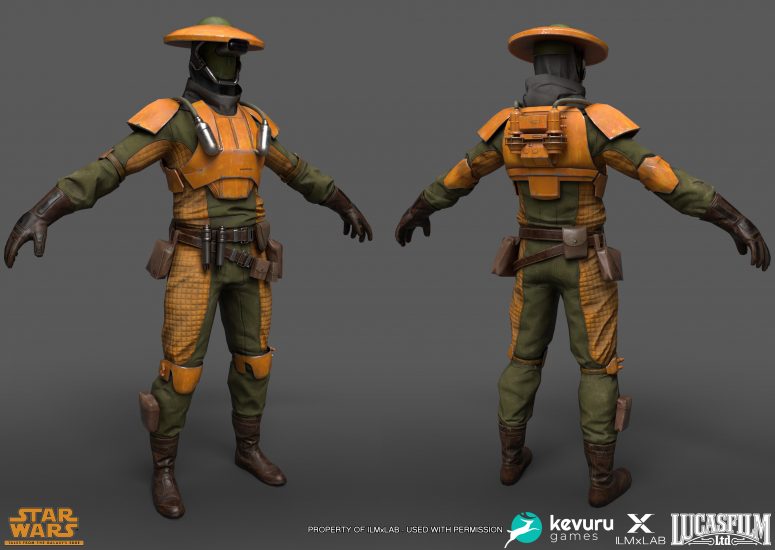 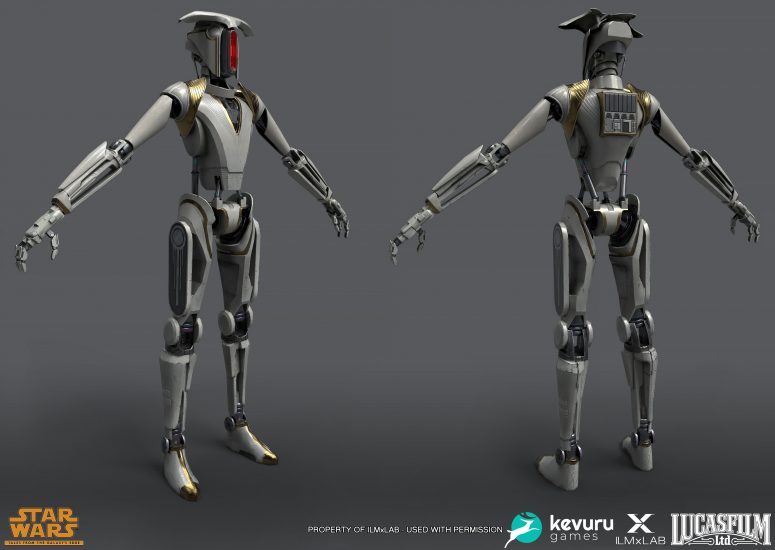 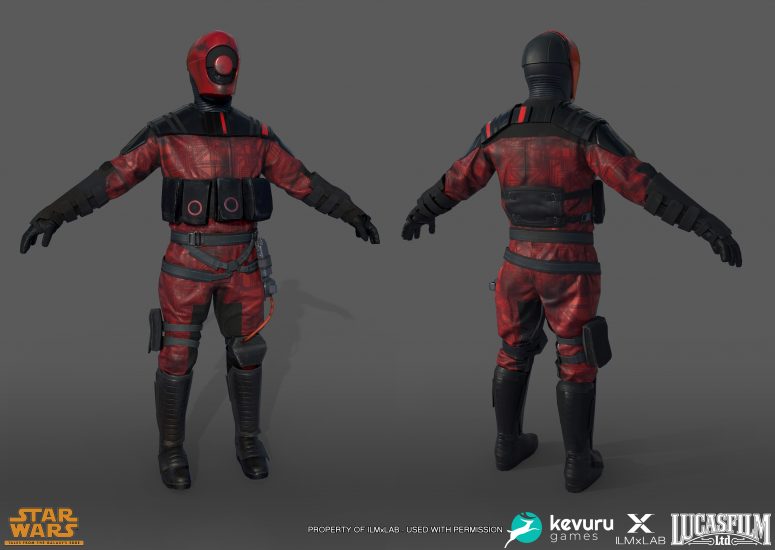 After a month of intensive work, our team succeeded in creating authentic models that completely satisfied the client. Thanks to a finely tuned LOD creation process, the models were ideally optimized for maximum performance in VR, which was known to require rendering from 90 frames per second for each eye.

Each character and detail of his appearance was created in accordance with the specifics of his game role and biography. So, the droid, as an expensive mechanism with a high level of maintenance, looked very well-groomed. However, due to its combat nature and the need to often move off-road, it had certain stains and scratches on the bottom of the legs.

Star Wars: Tales from the Galaxy’s Edge was released on November 19, 2020, and received a warm welcome. Players and critics alike commented on the diverse and dynamic game world, great immersion, wonderfully written dialogue, and great, well-crafted graphics that harnessed the full potential of Oculus Quest and Oculus Quest 2. Noting the rather clear hint of a sequel and the high likelihood of future DLCs, players expressed a strong desire to continue their game journey, complaining that the end credits appeared too soon. 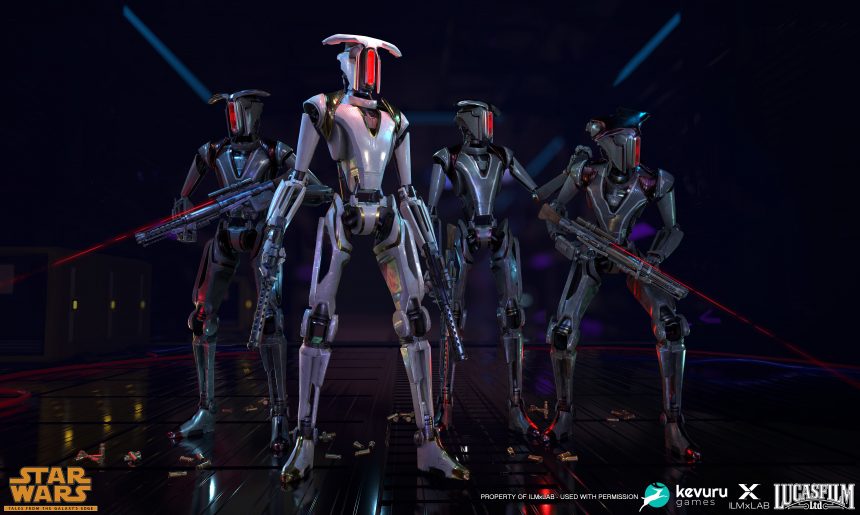 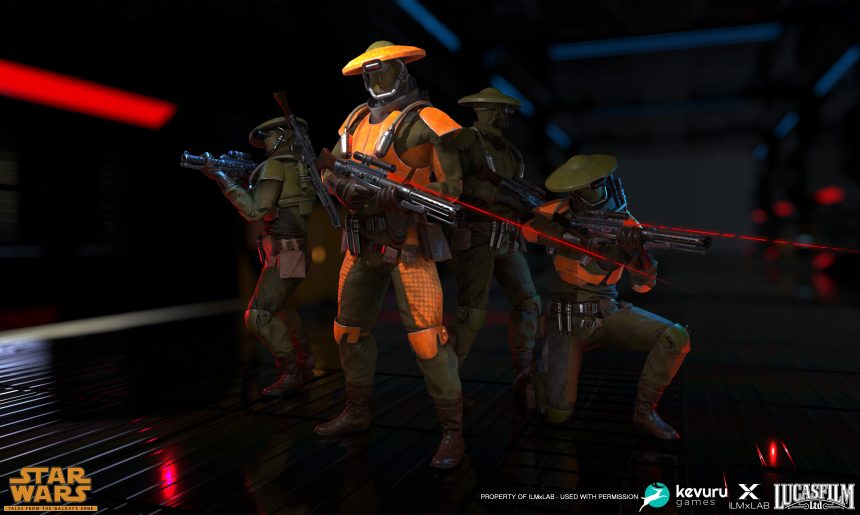 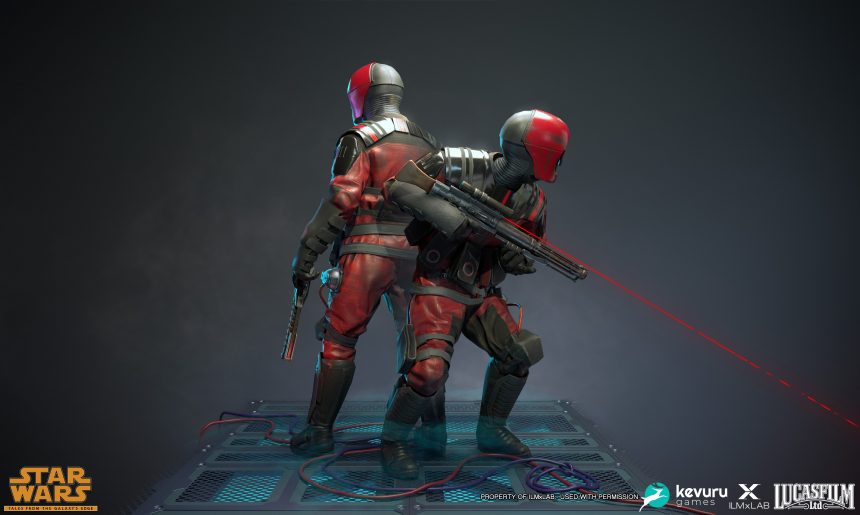 Working with Lucasfilm has left a lasting impression on our 3D team. Each of the artists is a fan of the Star Wars franchise and has their own top films, games and sources of inspiration related to this universe. The understanding of its specificity and the feeling of great respect for it gave impetus to the most enthusiastic and painstaking creation of models that fit perfectly into the environment.

Character work has always been special to us. After all, this is not just the creation of an abstract model, but the embodiment of individuality, a personality with a unique history, character, behavior, and reaction to what is happening. Every nuance of the biography is reflected in certain details, every battle leaves its mark. To touch the legendary universe from the inside is a responsibility and an honor on a literally cosmic scale, and we are extremely grateful to Lucasfilm for their trust and amazing cooperation.

Being part of a world-class project, working on a franchise that generations grew up with, was an incredible adventure that we would like to repeat again. And now it’s time for new challenges and game worlds. Perhaps yours?

Be sure to contact us if you already have an idea on ​​how to add fire to the gaming industry, be it a formed concept or a vague image. We’ll advise, design, shape, polish your intent, and together launch a brand new product that – who knows – may also turn someone’s world upside down.