Lucasfilm is one of the world's leading movie and entertainment studios, founded by American filmmaker George Lucas in 1971 and now owned by Walt Disney Studios. It is home to the legendary Star Wars movie epic and the Indiana Jones movie tetralogy. Lucasfilm includes studios such as Lucasfilm Animation, which is engaged in digital animation for films, television projects and games, Lucas Licensing, which licenses and distributes products manufactured under licenses for Star Wars, Indiana Jones and other Lucasfilm projects, Industrial Light & Magic, which is involved in visual effects, and Skywalker Sound recording studio. Visual effects studio Industrial Light & Magic – ILMxLAB – creates immersive game projects for augmented and virtual reality and is a graphics designer for Star Wars: Tales from the Galaxy's Edge for the Oculus Quest systems.

50 years on the market

Based in San Francisco, USA 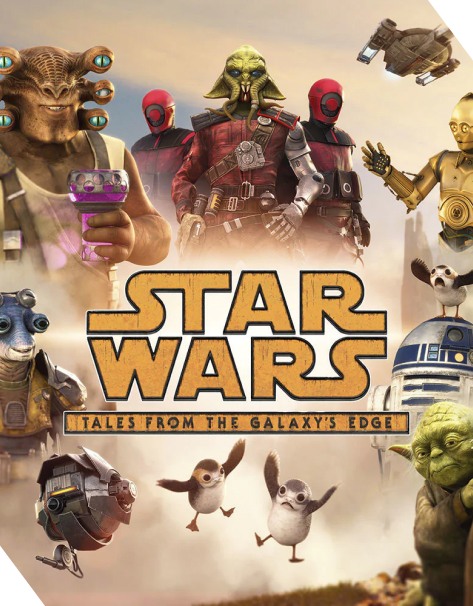 Star Wars: Tales from the Galaxy's Edge
Star Wars: Tales from the Galaxy's Edge is a VR-based action-adventure game that takes players on an unforgettable journey across the planet Batuu. The action takes place on the outskirts of the Black Spire Outpost, as depicted in Star Wars: Galaxy's Edge, breathtaking epic lands at Disneyland in California and Walt Disney World in Florida. Players take on the role of a droid repair technician working near the planet. But after the pirate attack, he gets into the escape pods and crashes to Batuu, where he discovers that anyone in the galaxy can become a hero. Players are given three difficulty levels to choose from, well-developed combat mechanics and the use of different equipment such as a jetpack, as well as a varied game world with luscious graphics and a fascinating storyline.
Play now
Production Workflow
A clearly defined and structured pipeline with the approval of tasks at each phase of work made it possible to quickly and efficiently achieve the optimal result following the client's vision.
Attsmun Industries Droid

There was a need to carefully work out the texture following the biography of the character – it has good maintenance but undergoes certain wear and tear on the lower part due to the constant advancing off-road. Two color variants of the droid were created – white, soldier, and black, commander. 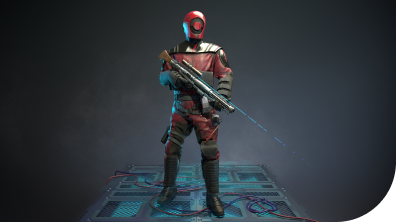 Boggs Henchman is a human character. He is an infantryman, armed with a percussive cannon and wearing a distinctive orange and green suit. Two 3D artists were responsible for this character, who carefully worked out the details of his figure and costume in accordance with the concept provided by the client. They created three textures for the character – orange, green, and orange-green. 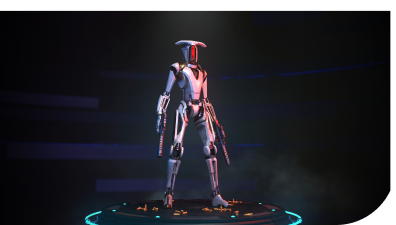 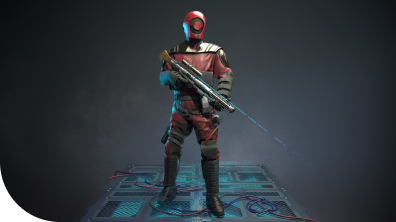 The creation of this character was the essence of the test assignment performed by the lead 3D character artist. After its successful completion, the Kevuru Games 3D team began working on the Star Wars project. This is a Guavian security soldier in his signature red suit, one of the cybernetically augmented people recruited as security forces by criminals from the Guavian Death Gang, which operated about thirty years after the Battle of Endor. 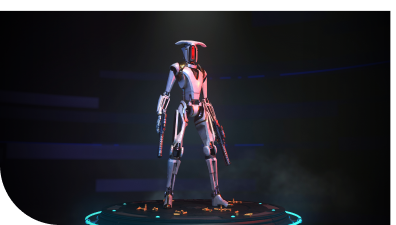 Team Structure
The creation of 3D characters for the world famous AAA project leaves its mark on the choice of specialists – we have selected the most experienced character makers seasoned in creating never-to-be-forgotten heroes for popular multi-genre games.
Lead 3D character artist
Supervises the process of creating 3D characters in accordance with the client's concept, makes the necessary edits and adjusts the workflow to the required time frame.
3D character artists
Work on the creation of 3D character models in different color options according to the concept provided by the client, based on the approved pipeline and team lead instructions.
Project manager
Organizes communication, controls the deadlines, monitors the compliance of progress with the approved estimation, as well as oversees the timely implementation of the edits.
Values Delivered

Partnering with Lucasfilm was not only a great challenge to hone our 3D character skills and contribute to world-class projects, but also an incredibly enjoyable communication experience.

After a month of intensive work, our team managed to create authentic models that completely satisfied the client. The models were perfectly optimized for maximum performance in virtual reality, which requires rendering from 90 frames per second for each eye. Each character and detail of their appearance was created in accordance with the specifics of their biography and role in the game.

Star Wars: Tales from the Galaxy's Edge was released on November 19, 2020, and received a warm welcome. Players and critics alike have given the same positive feedback to the diverse and dynamic game world, great immersion, beautifully written dialogue, and gorgeous, well-crafted graphics that unleash the full potential of Oculus Quest and Oculus Quest 2. Noting a fairly clear hint of a sequel and a high likelihood of future DLCs, players expressed a strong desire to continue their in-game journey, complaining that the end credits appeared too early.