A cultural phenomenon, that’s how the online video game Fortnite is called. It quickly broke into the gaming world in 2017 and without more ado began to gain jaw-dropping momentum. Available in three game mode versions that share a common gameplay and game engine – Fortnite: Save the World, Fortnite: Battle Royale and Fortnite: Creative – the game became especially popular thanks to the Battle Royale version, which attracted more than 250 million players worldwide and received several prestigious awards.

Battle Royale invites players to take part in a massive battle on a vast map – alone or in groups of two to four people, exterminating or avoiding the characters of other players until there is only one winner on the map. The player can choose a different appearance of the character – a skin purchased for in-game currency. Skins are a separate culture that constantly stirs up the interest of players: they want their character to look good, and if a partner or rival entered the game in a newfangled or menacingly mesmerizing skin, then they certainly need to look no worse!

The need to hold attention and engage players has led to the need to ensure a steady stream of new skins. Epic Games decided to team up with Kevuru Games to create new exclusive concepts for them. And it’s about how it happened.

The peculiarity of skins circulation in the game is that there is no need to spend real money to get them: there is a special in-game currency V-Bucks, which can be obtained for completing missions, tasks, and simply for the next entry into the game. Therefore, on the part of the players, there is no prejudice or annoyance towards skins, as happens with all sorts of game features that require a donation in order to unlock them.

Players are very fond of skins and carefully collect in-game currency to buy what they like. Therefore, Epic Games chose the correct optimization path for working with them, creating a unified knowledge base with all the standards and reference information for producing new skins. This allowed them to unify the basic requirements for skins and get rid of fragmentation of interpretations.

To ensure the correct work, our partner gave us access to the knowledge base. With its help, our concept artists were able to create concepts that had strict guidelines for style, colors and parameters specified by Epic Games. In creating some of the concepts, our team was given complete freedom of imagination, which we actively used to demonstrate our creative potential and deep expertise.

Epic Games’ trust and openness to dialogue allowed our artists to make suggestions and corrections even to those concepts for which the client initially had a specific vision. Many of our team’s ideas regarding colors, equipment and weapon handling techniques were enthusiastically accepted, overshadowing the initial ideas. 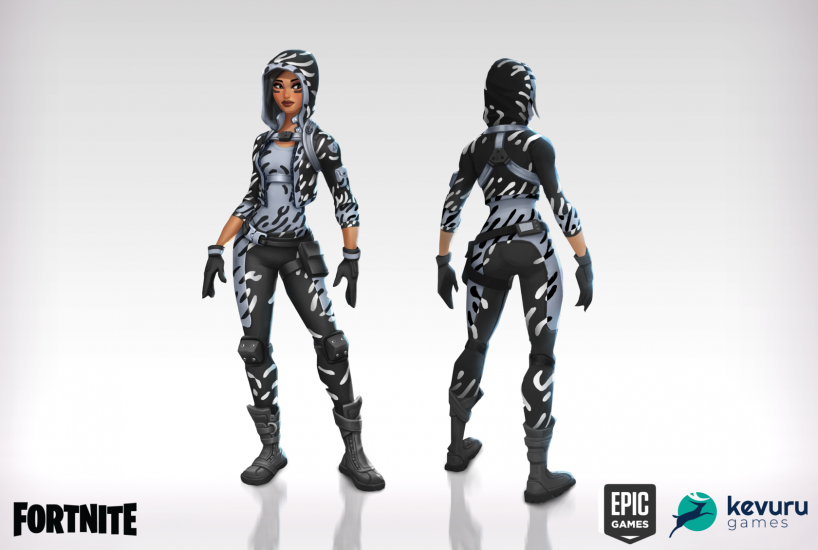 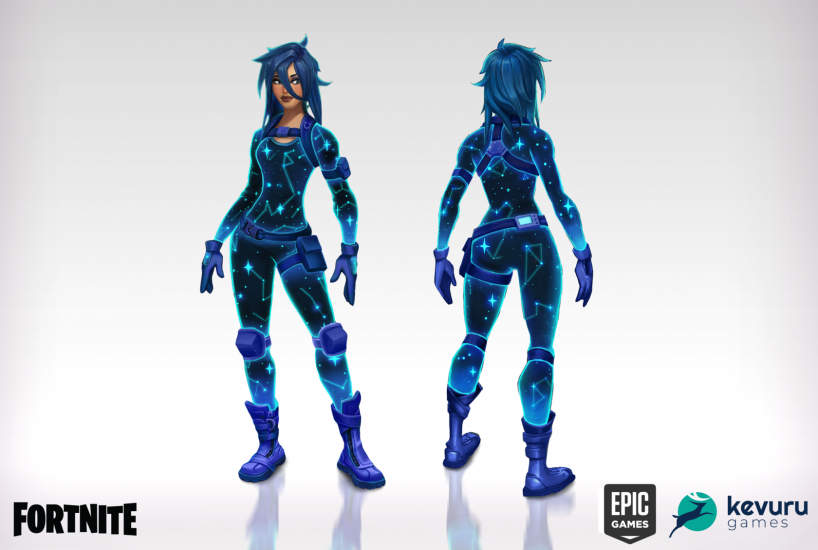 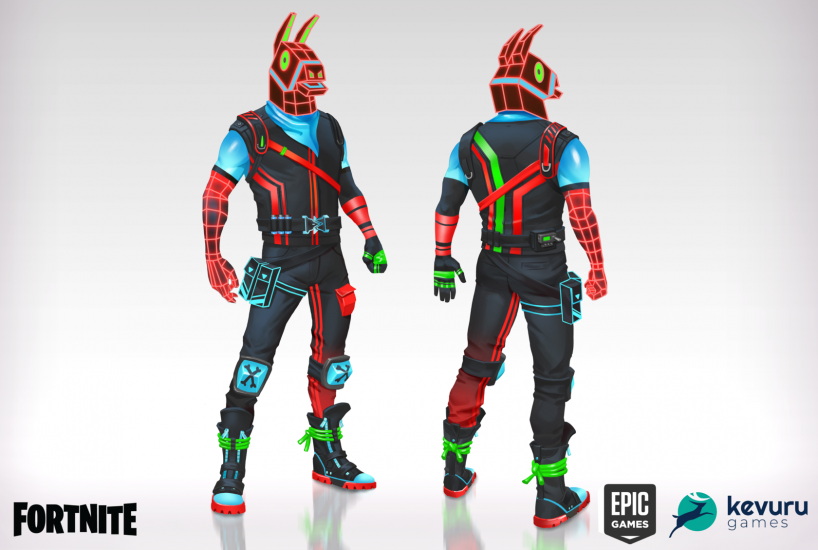 The distinctive feature of cooperation with Epic Games was full access to all skins ever created without any restrictions. Thanks to this, the artists quickly got their bearings in the main thematic style, which must be adhered to, and immediately got down to work.

Interim approvals and discussions with Epic Games representatives took place almost daily: our team provided about three works at different stages of implementation per day and took an active part in discussing possible additions or recommendations.

About the Created Concepts: Personal Profile

She is the star of any shootout. Beautiful, agile and dangerous, she successfully combines innate talents and skills acquired in battles to demonstrate truly cosmic pirouettes to stunned enemies. Her speed is disarming, and the outfit is dazzling: she leaves no one a chance. First appearing on January 1st, 2020 in Chapter 2 of Season 1, Astra was featured in the Shooting Stars set, categorized as an Epic Outfit, and captivated players with her cosmic grace and elegance.

Insanely cute and incredibly charming tree instantly became the player’s favorite thanks primarily to its touching muzzle with beady eyes. It seems that such a creature is not able to offend anyone, but appearance can be deceiving when it comes to confrontation. He first came out of the fairy forest on November 7th, 2019 in Chapter 2 of Season 1. Now he is in the Woodsy set, is a Rare Outfit and is good at disguising himself in forests and groves.

He’s one of those who definitely likes to appear like a bolt from the blue or snow out of nowhere: the snow is actually his head filler along with the Christmas tree. Funny, festive and extremely extraordinary, he fell into the world of Fortnite all of a sudden on December 1st, 2019 in Chapter 2 of Season 1, settled well in the Frosty Fights set, became Epic Outfit and one of the favorites of the winter season. Who knows what will happen to this world if he shakes his magic head too actively.

According to Polar Legends, after which the set was named, the Christmas and New Year seasons are particularly lavish with spectacular new Frozen Series gear. This girl is a vivid confirmation of this: her adorable winter outfit, fluffy hat and icy breath make her look like a fighting Snow Maiden. She appeared on December 18th, 2019 in Chapter 2 of Season 1 and since then has confidently crossed both snowy and other terrains.

The pure glow of neon rage. A wolf or a rabbit, this will only be understood on the battlefield. And there, the animal power will break through. Released on February 28th, 2020 in Chapter 2 of Season 2, this Epic Outfit from the Neon Jungle set quickly caught the attention of players with a mesmerizing duality of its animal nature. Strange and a little awkward at first glance, this beast sensitively monitors every heartbeat of enemies and brings them a quick and inexorable death.

When it is not clear what to do next, leave it to chance. She appeared in the spring, during the liberation of the world from the shackles of winter, on March 15th, 2020 in Chapter 2 of Season 2, and, of course, became the leader among the Rare Outfits of the Spring Spirit set. Cheerful, active and fiery-haired, she is a born leader, ready to guide people to any achievement. She fights as if dancing and takes down enemies with a smile on her lips. Many believe that being killed by her hand is not so bad.

Working on such large-scale projects is always a challenge, not only in a creative sense, but also in terms of realizing a huge responsibility in all respects at once. To ensure information security when working with our team, we sign nondisclosure agreements that guarantee the protection and safety of our partners. 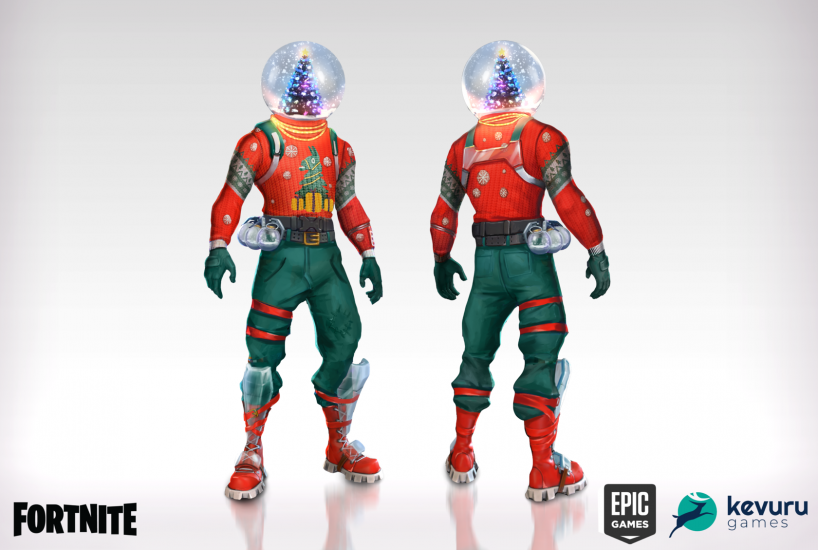 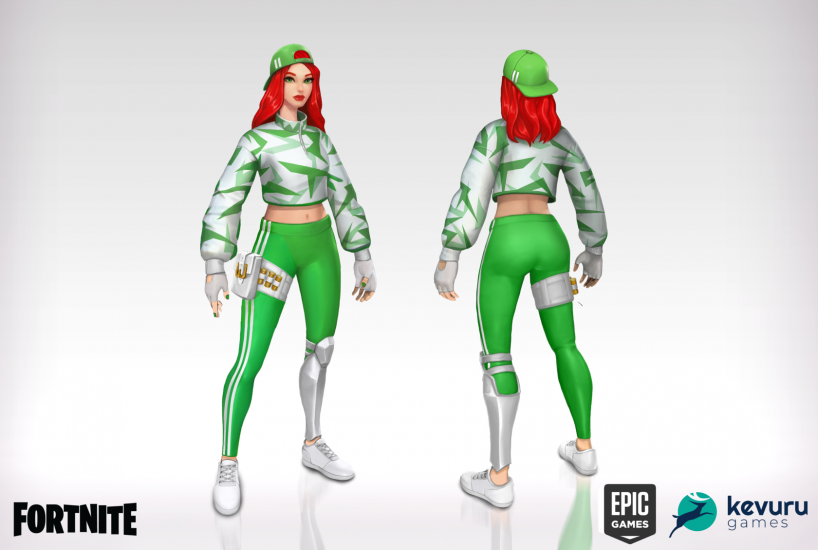 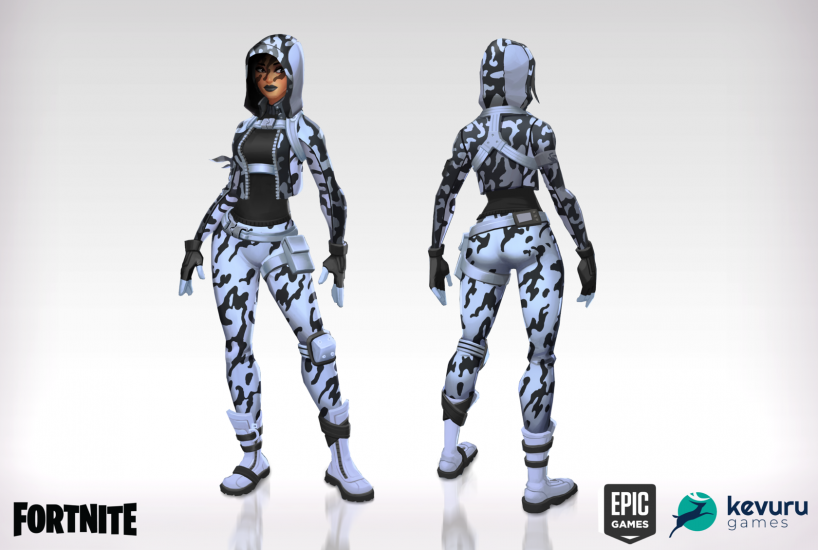 During 10 months of cooperation, about 120 unique-looking concepts of skins for various thematic areas have been created. They fit perfectly into the atmosphere of the game and are already actively used by players to explore and conquer the incredible world of Fortnite.

Each created character received an exclusive attachment, also developed by our team. It is called back bling and has a special shape, color and features that match the specifics of the character. This can be a backpack, badge, patch, shield, wings, helmet or any other item.

Many players managed to appreciate the loveliness of charming Bushranger, the gracefulness of cosmically beautiful Astra, the audacity of red-haired Chance and many other characters from a wide variety of sets. And what could be better than the recognition of not only the partner who appreciates our exceptional dedication to work, but also of the players who admire the skins designed according to our concepts? 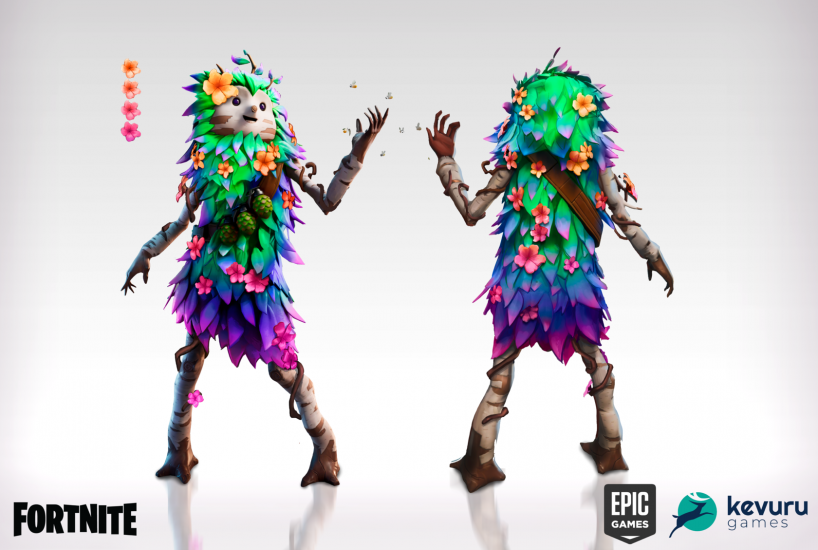 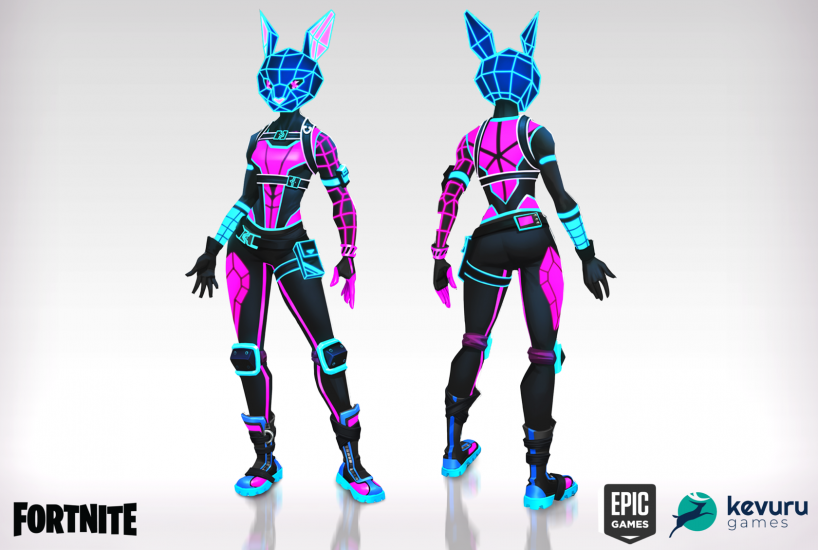 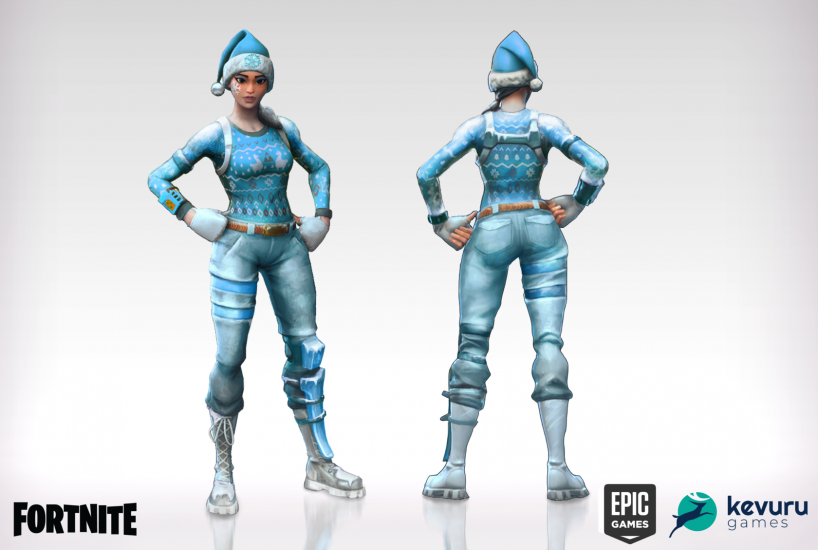 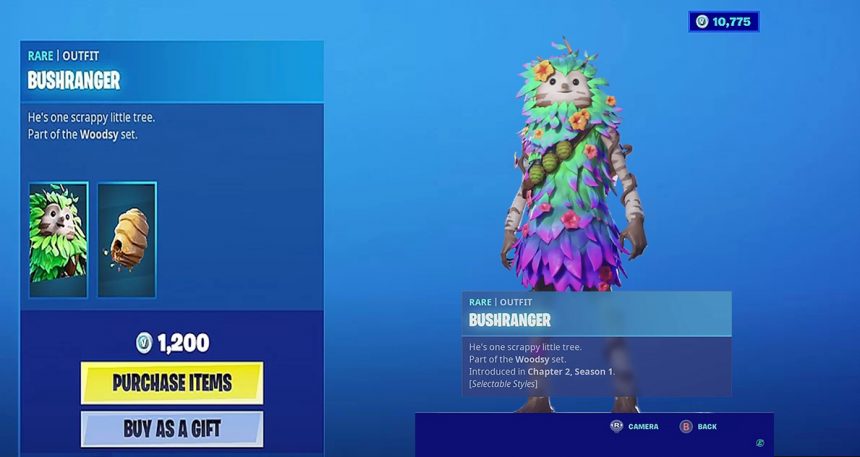 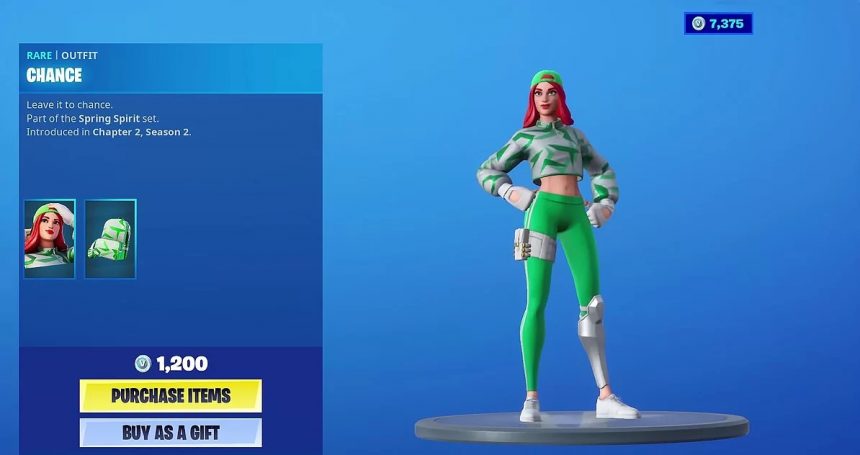 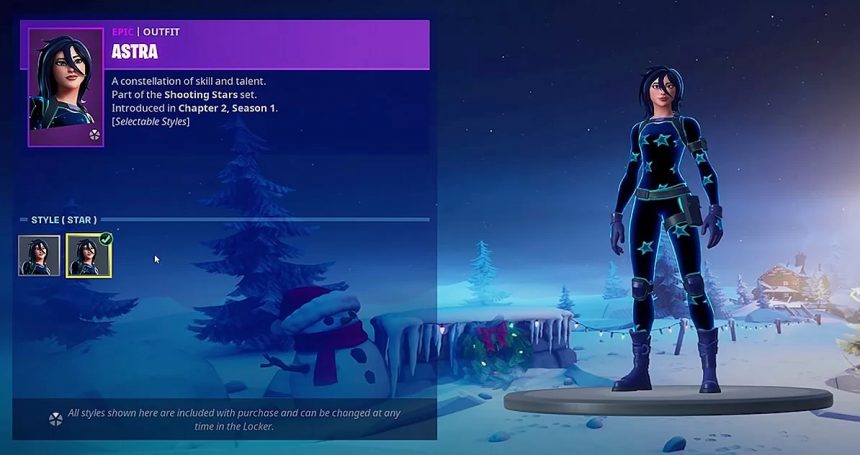 Our team is ready for challenges: this is an integral part of creative work, claiming to spread beyond the limits. Working with characters is our separate passion. Kevuru Games is happy to take on major world-renowned projects and ensures the highest standards of collaboration in all areas. Flexibility and adaptability allow us to easily adapt to the brand’s DNA while maintaining our unique creative vision. A well-established work process and high project management standards enable us to guarantee our partners the timely fulfillment of all obligations in the agreed volume and budgetary framework. And if we move away from the officialdom, then our team just loves to create cool artworks and contribute to the success of truly worthy video games. Rest assured: your game will shine with us!

Feel free to drop us a few words about your ideas and plans for a new or existing game: together we will come up with how to skyrocket it to new heights!

Star Wars: May the Force of 3D Character Design Be With You
15 min
468