Mia Games is an Israeli mobile game developer that has grown from a small company of game enthusiasts to a well-known game studio in Tel Aviv. Artists, designers and programmers have gathered to have a good time and unleash the inner child of all gamers who come into contact with their games.

Inspired by the genre of merge games, the studio founded the Merge Lords direction. It included a number of games with different themes: cars, fashion, food, etc. And when they needed help redesigning one of these types of games, our team came to the rescue.

The merge game genre is not new, it features games that overlap with many other genres. Merge games involve combining resources and other elements to create completely new elements that are critical to the gameplay. In some of these games, you may need to combine 3 or more items, similar to match-3. In other cases, you may only need to concatenate two or more elements.

What makes merge games so special is their ability to keep the player hooked, wanting to know what update the next merger will produce. It was the constant interest and passion of the players that became the main priority of Mia Games when they developed Merge Lords: Foodcourts. In this game, players had to manage food courts, combine them, sell food and expand their food network.

Initially made in 3D, the game seemed to the developers not bright enough and appealing. A large number of 3D elements turned out to be cumbersome and made the casual game heavy and clumsy. Therefore, it was decided to transform it into 2D.

The client provided a list of desired food courts: Asian food, hot dogs, ramen, pizza, and more. Their visual representation in the game was completely left to the artists.

The process of working on locations was as follows:

Due to the fact that the customer continues to think about the optimal presentation of the location with food courts, there is no final render – the work was limited to approved sketches in the amount of 18 ready-made food courts. The customer plans to add a 2D constructor to the location, allowing players to customize the space and add trees, flowerpots, fences and other elements at their discretion, as well as to make a combination of 2D and 3D – leave 3D figures of people who are food buyers in the game. 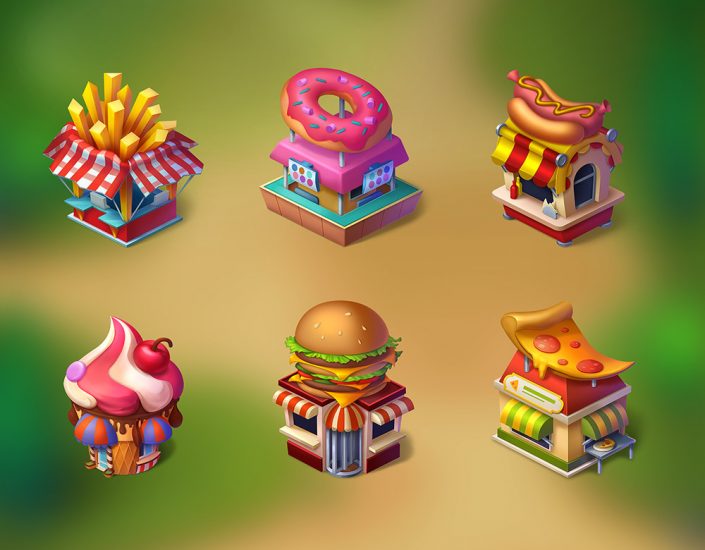 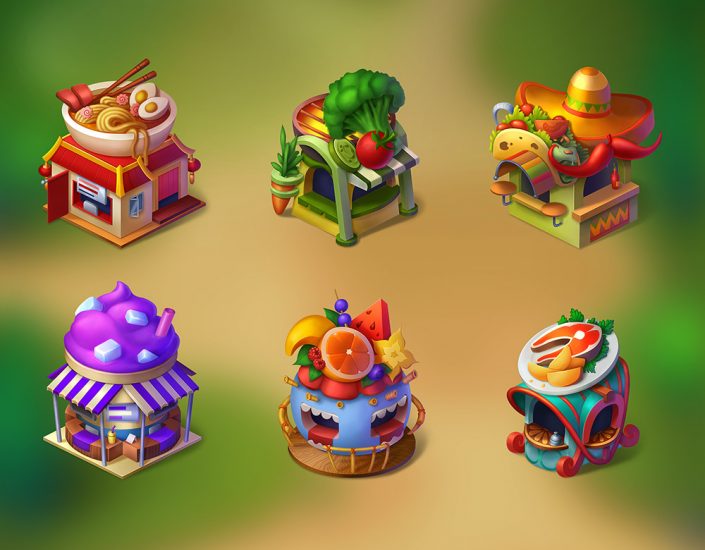 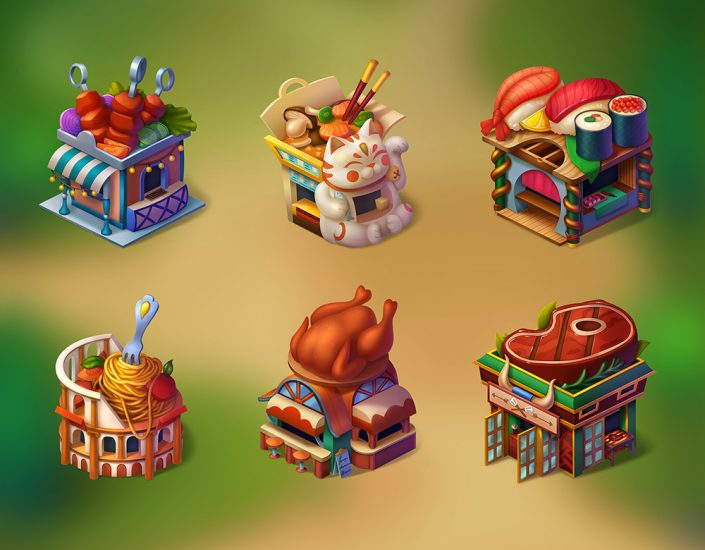 After the players complete the work on the food courts, they get access to the second location – an amusement park with carousels and other types of entertainment. Our team completed work on this location up to the rendering according to the above pipeline.

In addition to locations and their content, our artists developed a juicy appealing logo for the game, as well as a bright and eye-catching splash screen that perfectly represented the essence and atmosphere of the game.

For the customer, speed was a priority. Therefore, the original team of one environment artist gradually expanded to three people. Delivery took place every day – every day, one artist provided the client with three versions of the sketch for consideration. And if the approval of the location itself without filling was a matter of one week, then the work on countless elements of food courts, attractions, trees, fountains and benches significantly increased the time required to complete the project. For example, coloring elements took half a day, and rendering took several days.

From the client side, their art director was the communicative link. He contacted our lead 2D environment artist several times a week to discuss current progress. Feedback was overwhelmingly positive with clear comments on possible improvements or small detail fixes.

During 5 months of hard and painstaking work, our 2D environment team created:

All the necessary elements were also prepared for animation. 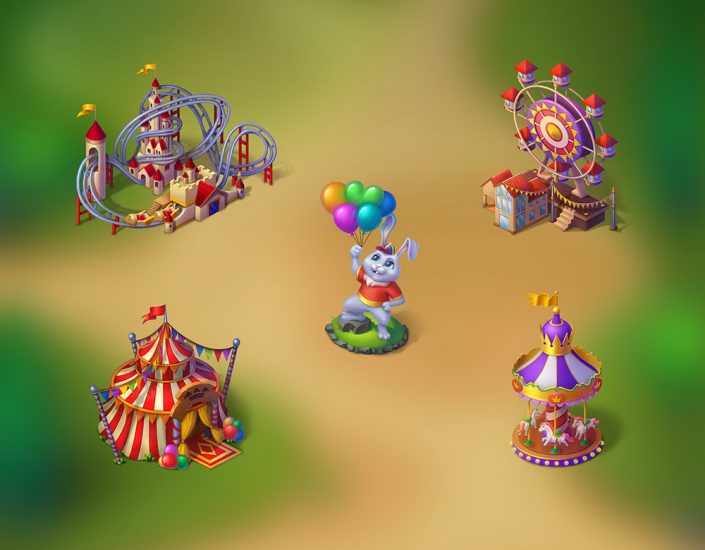 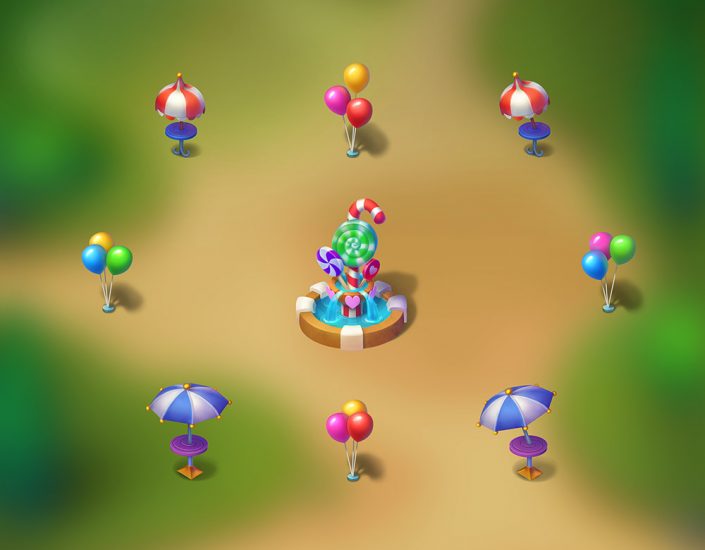 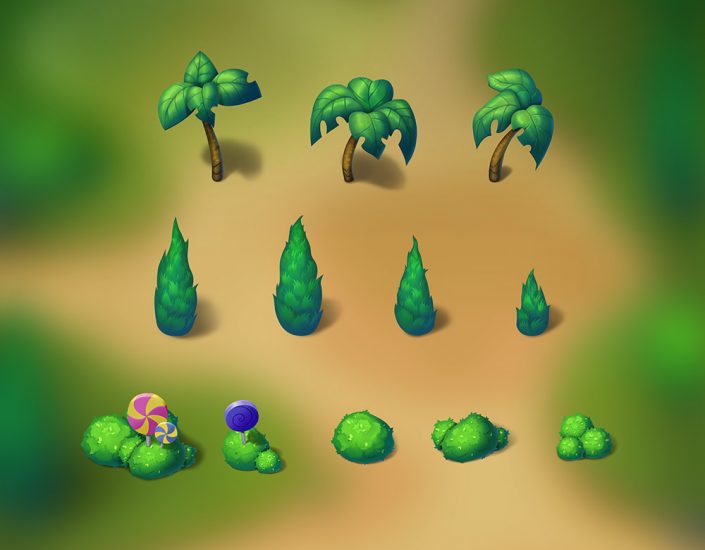 Collaboration with Mia Games has been interesting, intense and resource-rich for our 2D environment team. We have succeeded in providing the client with more than satisfying results and boosting our expertise in 2D casual art environments.

Despite their apparent simplicity, casual games require great skill and proven experience: a highly competitive environment, a huge number of analogues, constant attempts at plagiarism and hackneyed game mechanics make creating a good and interesting casual game a real challenge. At the same time, it is important to understand that it should be good and interesting first of all for the player. It is on them that we focus when creating our game art – to make it the most eye-catching for the player.

Your casual game success story could start right here. It doesn’t matter if you are going to build it from scratch, complement a partially completed product, or completely redesign an old project. In any case, we will provide comprehensive advice and a helping hand on all aspects of the game from concept to release. Be sure to contact us if your game idea can no longer be contained – perhaps this will come as a complete surprise to jaded, skeptical players, who, however, are always secretly waiting for a miracle.

Stand With Ukraine Against the Russian Invasion
15 min
1779